Tips on Staying Visible While Running

Running is one of the healthiest forms of exercise. According to the American College of Cardiology, running for just 10 minutes every day can extend your life by several years. While it’s often more peaceful to run on a designated jogging trail or park, it’s common for most of us to run where motorists travel. Here are some top tips & techniques you should keep in mind on your next run to ensure others on the road see you.

Stick to the Sidewalk

Sidewalks are usually safer bets when running. You’ll have almost no chance of getting hit by a car when running on sidewalks. Just keep in mind that you should be vocal when overtaking pedestrians. Don’t expect anyone to stay aware of their surroundings—a simple “on your left” will do wonders for making sure pedestrians don’t step in front of you last-minute. If you’re running in an area with no sidewalk….

There is no federal law stating which side of the road you should run on, so the choice is yours. If you don’t already make it a habit to run against traffic, you should start. Running against traffic isn’t necessarily about giving motorists more time to see you, but it’s so you have time to dive out of the way if a car approaches quickly.

Dress for the Time of Day

What you wear makes a big difference when it comes to visibility. Choose your outfit according to the time of day you intend to run:

Daytime runners should wear at least one piece of florescent clothing. Think bright yellows, oranges, and greens here. While running at night, try wearing something that’s reflective. It’s hard to see anything at night, but reflective clothing is easily seen with a car’s headlights. 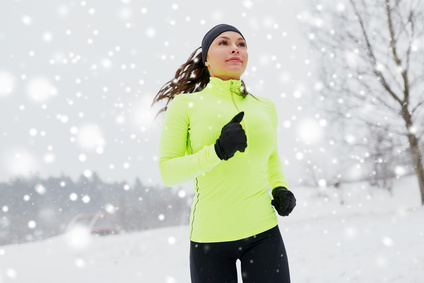 Speaking of running at night, always have a flashlight on hand. Flashlights are useful for two reasons—a bouncing light is often easier for motorists to see, and it’ll help you see uneven pavement or potential hazards on the sidewalk. Tripping or falling on uneven sidewalks was the #1 cause of pedestrian injuries in 2012, accounting for 24% of cases according to Pedestrian-Bicycle Info.org.

Two runners are easier to see than one. Three runners is a downright crowd! If you want to make sure motorists give you space, run in a group. Just try not to run more than two abreast to not be a sidewalk hog. 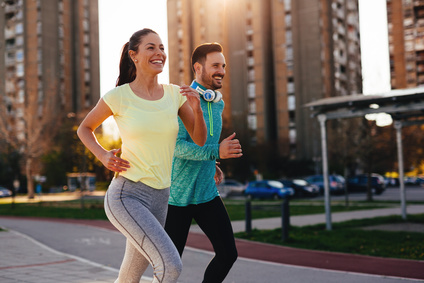 While it might be tempting to just run through most intersections, keep in mind that cars travel much faster than you, and you’re a lot harder to see than another vehicle. Follow all traffic lights as you would if you were driving a car. When running through intersections, it’s also a good idea to ensure a motorist sees you. Waiting for him to make eye contact and wave, or waving to the motorist yourself are good ways to ensure the path is clear at intersections.

These are just a few tips you can incorporate into your next run—what are some of your favorite ways to stay seen by motorists?